I’m a little late getting this blog post out, but only because of the extreme weather we’ve been experiencing here in the Pacific Northwest. Looking back on the events of last week, when my friend Christy worked tirelessly to rescue a stray chicken living in the local Denny’s parking lot, I’m even more grateful to her. This is no kind of weather for a chicken to endure alone. 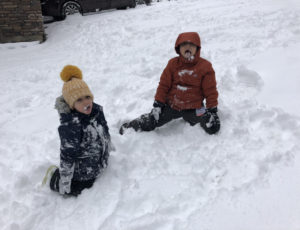 If you haven’t seen the video yet, here’s some background for you. For the last year, there have been many sightings and rumors of a chicken living in a strip mall near one of the busiest roads in Bellingham. Few pictures were captured, but last week I was able to grab this one. 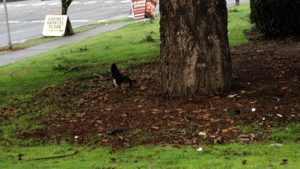 My friend Christy is a passionate animal lover and could not tolerate the idea of this chicken living without a flock in a high-traffic area. Even though there were some who encouraged her not to do it (they preferred the idea of the chicken being “free”), Christy set out to capture the chicken and integrate it into her large flock. She called me for assistance.

This chicken was no fool, though. She proved herself to be very intelligent, and after two days of trying, we weren’t able to catch her. On the third night, after temperatures dropped to below freezing, Christy returned with her husband and a friend to attempt to pluck her off the roost. It was no easy task and traffic did have to stopped at one point, but Christy’s husband was able to catch her!

To see the full story of Chick Norris, click the play button below!

Do you think Chick Norris is better off now or do you think she should have stayed free? Let me know in the comments!