It was a couple of weeks past Yom Kippur when my friend Peninah and her husband were walking through her Brooklyn neighborhood. At some point during their stroll, Peninah saw what appeared to be, of all things, a chicken. Yes, you read that correctly. She saw a rooster pecking and scratching on the streets of Brooklyn, New York. I found this pic of the area on Google Maps: 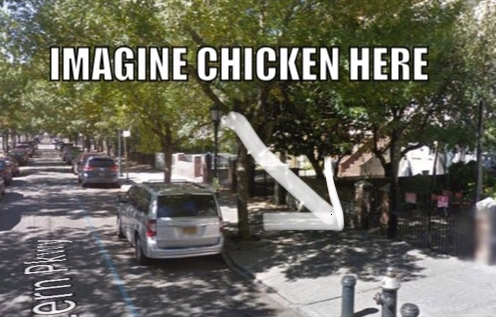 The chicken was on the sidewalk in front of a men’s dormitory. When Peninah approached the bird, he ran through the fence in the direction of a group of young men, who told her he had been there for a couple of weeks. They said they had been caring for him the best they could, feeding him various scraps and bread. Peninah must have the most compassionate, glowing aura, because before she knew it the young men were handing her a box with the fluffy, white rooster inside. She and her understandably reluctant husband (I mean, can you blame him?) headed home with their new friend.

Peninah set the bird up in her bathtub and assessed the strange situation while her children doted over him. He turned out to be pretty tame and settled into the domestic life like a duck to water. Only this was no Central Park duck. This was a chicken. A chicken she found on the sidewalk in one of the busiest urban environments in the world. How did this happen? 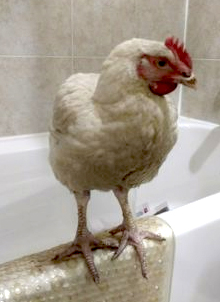 She figured he was meant to be in a pot of matzo ball soup yet somehow managed to make it to the other side. But how? Maybe someone saw a special spark in his eye and spared him. Maybe he snuck out a bathroom window. Maybe he hailed a cab but couldn’t come up with the fare to get to Jersey. As the owl says, the world may never know.

Needless to say, Peninah, her children, and eventually her husband fell in love (okay, maybe her husband fell in “like” LOL). They decided to keep him for the time being and gave him the very fitting name “Fussy” (did I mention Fussy likes treats?). 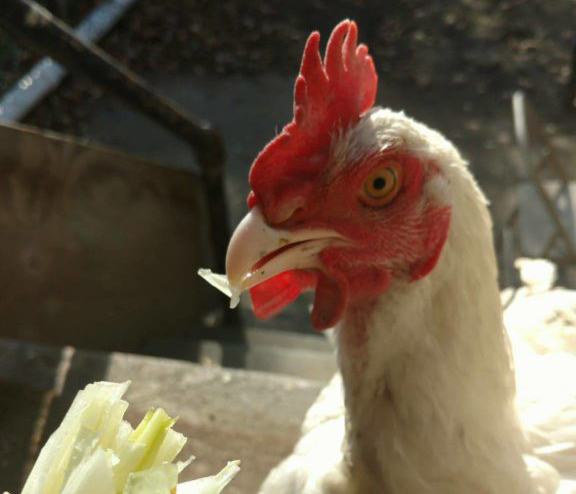 For several months, Fussy lived quite the posh life as a Brooklyn rooster. Since he is a meat chicken who needs to stay fit lest he get too large for his legs, his diet consisted of fresh greens, bugs, excellent feed, and the occasional Cheerio from the kitchen floor. He spent his days mostly outside, pecking and scratching the earth while enjoying the fresh air. Not a bad life at all. Peninah even got him a couple of ladies, which he, ahem, liked very much. Recently, it was learned that roosters aren’t allowed in Peninah’s neighborhood, so she did what any good chicken mama would do and found a wonderful new human to love and care for him for the rest of his days. He has many ladies now and is still eating healthy and in great physical shape. One thing is for certain: Fussy is a loved guy.


Fussy’s story is the first in my blog. When I think of him, I think of new beginnings. I think of letting go of the past. I think it’s never too late to make a new story. I think Fussy is incredible, and I can’t wait to hear about all the amazing things he will do with the time no one thought he’d ever have. <3 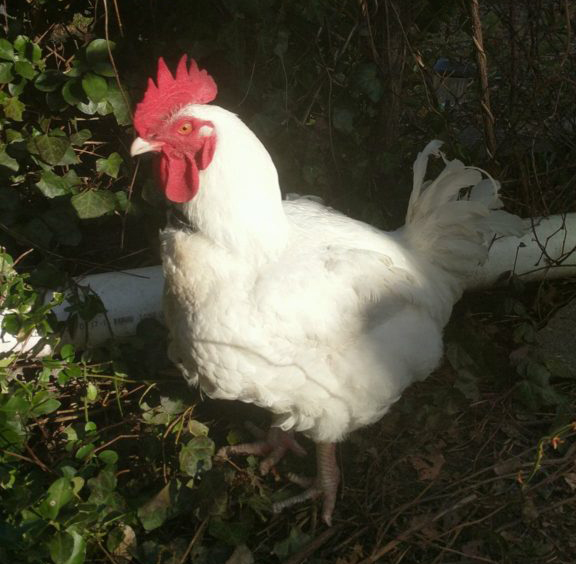