Once upon a time in Chickenlandia, The Little King declared his love for dancing. The President of Chickenlandia was a benevolent leader, and so encouraged dancing of all kinds. Well, almost all kinds. There was one chicken dance that was strictly forbidden! 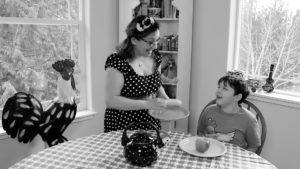 On one fateful day, The Little King of Chickenlandia declared his desire to dance The Serama, The Forbidden Chicken Dance! It was, of course, met with disgust from The President of Chickenlandia. 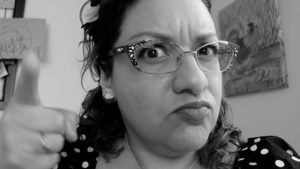 But that didn’t stop The Little King from bustin’ some serious moves! 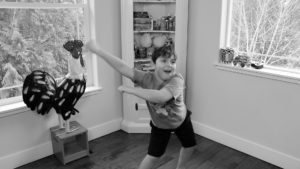 Do you think The President of Chickenlandia came around? You’ll have to watch the video to find out!

It’s no secret to my friends and family that while I love the changing seasons, I definitely prefer when they are changing into Spring or Summer. It’s true, despite having a Canadian husband I’m no fan of colder temperatures. The way I get through these months is by jumping head-first into the holidays. I absolutely love them, and Halloween is no exception. This year, I’ve decided to share my love for all things spooky by having A Very Chickenlandia Halloween.

We usually go all-out for Halloween, with a haunted house on our covered porch every year. Since I have young kids I like to keep it on the less terrifying side, but we do have a flying ghost and a large jumping spider! Costumes vary and we’ve certainly enjoyed our share of different chicken costumes, but this is one of my favorite pics ever:

What could make one of my favorite holidays even better? My chickens, of course! Last year, you might remember my very silly trailer for the obscure cult film Chick-o-ween 2: Second Hatch. This year, I’ve taken it up several notches and created a short film for all my fans to enjoy. (FYI – I’m pretty confident this won’t scare little kids, but you never know! It does have spooky music and I look kinda scary in it LOL, so maybe give it a watch first if you have really young ones.)

I hope you love this Chickenlandia Halloween Special! It’s the sixth episode in my series Chickenlandia Stories, and it’s called The Creature! You may recognize the narrator as my grumpy but lovable rooster, Philippe:

Do you enjoy Halloween? If so, what’s your favorite thing about it? Let me know in the comments. And make sure to have A Very Chickenlandia Halloween!

Are you on Instagram? I recently joined, and to be honest, it’s kinda dangerous! Only because I’ve been introduced to some of the cutest chicken things through that platform. One of the companies I’ve been following for a while is Henny and Roo. I’ve been drooling over their subscription boxes but haven’t ventured to take the plunge until now. It’s true, I Henny and Roo and you can too!

Full disclosure, I contacted Henny and Roo after my YouTube channel had been up and running for a while, hoping they would bless me with sponsorship. I had already heard really good things about them from my other fave company Scratch and Peck Feeds, so it seemed like a good fit. I cannot tell you how excited I was when they responded with a special deal for my Chickenlandia fans! Keep reading and I’ll reveal the special code for 10% off the October 2018 subscription box (while supplies last) or a new subscription.

I don’t want to give too much away regarding what’s in the box, because of course I made a YouTube video about it and I think you will enjoy it! But I will show you this example of chicken cuteness. Don’t you just love it? I found everything else in the box to be very useful for chicken keeping (and there’s some candy for humans in it, too!).

As Welcome to Chickenlandia continues to grow, I’m honored to be building relationships with companies I admire. I hope you’ll take a few minutes to watch my new YouTube video, Henny and Roo Unboxing! Just click the play button below and make sure you subscribe to my channel so you don’t miss anything fun:

To receive 10% off your order of the October 2018 subscription box (while supplies last) or your new subscription, use the code CHICKENLANDIA at www.hennyandroo.com! Offer does not apply to other shop items but subscribers always save 10% off in the Henny and Roo Shop. Be sure to let me know how much you love your subscription in the comments!

I can’t believe Chickenlandia’s YouTube Channel has been up and running for nearly six months. Has it really been that long? I feel like it was just yesterday that I got my very first selfie stick and shot my first simple video about my little chickens Philippe and Poptart. Now they are all grown up, laying and crowing, and I’ve come a long way since then as well. I certainly plan on only growing from here, so keep an eye out!

I’m gonna be honest and say that when I shot the above video, I had no idea I would be uploading new content every week, and that it would grow into something I truly love. For twenty-four straight weeks, I’ve shot, edited, and shared my chicken adventures with you. I even started a series called Chickenlandia Stories. You might remember this one about Little Stinker, my tiny escape chicken.

I’ve got so many exciting things in store for the future, and I’m always looking for good chicken stories. So if YOU have a story to share, please don’t hesitate to contact me. I’d love to hear about it. You can submit your chicken story by clicking here: submit a story to Chickenlandia!

This week I created a new trailer for my YouTube channel, which appears on my channel page. I hope you’ll check it out by clicking here: Welcome to Chickenlandia on YouTube. Please share, like, comment, and subscribe to my channel if you haven’t already, and of course, share it with your friends and family. I’m so looking forward to many more Chickenlandia adventures, and I want to thank, from the bottom of my heart, all those out there who have supported me along the way. <3

When I was a kid, I wanted to be everything. I wanted to be an actress, a talk show host, and of course, a rock star. Back then, I didn’t really know what it meant to follow your chickens dreams.

When I grew up and the rock star thing didn’t work out, I moved to Miami Beach, enrolled myself in some film classes, and decided I was gonna become a filmmaker. Eventually, I made my way to Hollywood, where I worked as a personal assistant and then became an administrative assistant at Lifetime Television.

I had a few copyediting gigs, produced a script reading, and ended up pitching a couple of reality shows to some important people. Alas, when all was said and done, the Hollywood thing didn’t really work out either.  After about five years in Los Angeles, The First Man and I got married and moved to Bellingham, WA to start a family.

I didn’t regret how things turned out, but I confess that I sometimes felt a little empty when I thought about the dreams I once had. That is, until the day I held my first baby chick.

On that day, my new dream was born. And you know what? Because I followed my chickens dreams now I’m doing something I really love. I’m making YouTube videos! So I guess I became a filmmaker of sorts after all. Check out my new YouTube video Follow Your Chicken Dreams by clicking the play button below.

So there you have it. My dreams really did come true. And I hope yours do as well. <3