Have you ever looked at someone else’s life and thought it was perfect? Maybe you’ve even felt a little bad about your own life as a result. I think we’ve all felt this way at one point or another. That’s why it’s about to get real in Chickenlandia. We need to talk about the nitty gritty of chicken keeping (and life)! Yup, you guessed it: we need to talk about POOP and how everyone deals with it.

I’ve been in this chicken game a while, so I’ve spent a lot of time learning from the big time chicken experts. Of course, I love their photos on Instagram and their books about the joys of chicken keeping. But I always feel there’s something missing in their images. I’m always wondering, where’s the POOP?

I want people to see the real me and to know that in chicken keeping as well as in life, poop happens. Cleaning and dealing with poop is just part of the territory. I’ve got some nice products that I use along with good husbandry to keep things under control. And for dealing with life’s poopy moments? Well, that’s why I have chickens: to give me perspective. Watch my latest YouTube video to find out more!

And just remember that even though other people’s lives look perfect, EVERY coop has poop. <3 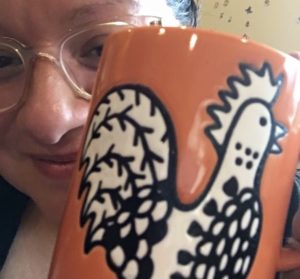 I arrived home from an event last week to find a mysterious package on Chickenlandia’s doorstep. Okay, so it wasn’t THAT mysterious; I knew the folks at Scratch and Peck Feeds had sent me something, but when I saw the shipping notification and inquired about it, no one would tell me what it was! I was only told it was a “surprise”. Of course the kids and I had to open it right away. Check out the “unboxing” video on our new YouTube Channel, or click the play button below (we also introduce a chicken adorably named by my four-year-old):

So, what exactly is this new product from Scratch and Peck? Well, it’s called Coop Confetti which is totally the best name ever and I LOVE it. Seriously, I’m not just saying that because I’m an ambassador for them. I genuinely love their products and this one is no exception. Scratch and Peck teamed up with Lisa Steele from Fresh Eggs Daily to create it, so I’m not surprised how fab it is. It’s a mix of lavender, peppermint, rose and other calming aromatic herbs. I’m just gonna go out on a limb and say that all those things smell a lot better than my coop on most days LOL.

The instructions say to sprinkle it in the nesting boxes and on the coop floor as needed. So far, I’ve been using a little every day and it really helps to keep the coop smelling clean and fresh. I have to say I think my chooks love it too. 😉 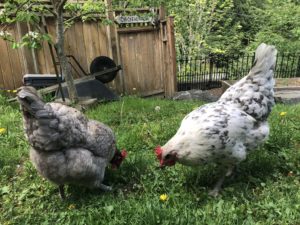 So there you have it, Chickenlandia’s mysterious package revealed! Look for it at your local farm store or go to scratchandpeck.com to grab some for yourself. 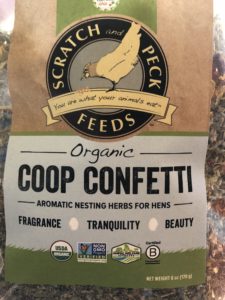 What about you? Do you have a favorite way to freshen up your coop? Let me know in the comments!